Just last week, Twitter announced that it’s testing a new addition to the site which allows users to schedule their tweets using Twitter.com. Although this has been available for a long time through TweetDeck, this is the first time users can access this feature through the actual Twitter app. TweetDeck (now owned by Twitter as a standalone app) confirmed the test through a recent post.

Tweet scheduling on https://t.co/8FModRv1sl? Yes please! Starting today, we’re experimenting with bringing one of @TweetDeck’s handiest time-saving features into Twitter. Tell us what you think if you’re part of the experiment. pic.twitter.com/4pI9xrbPEP

At the moment we have no confirmation of how widespread the test is, but we can establish that it is a ‘semi-public experiment. We do hope Twitter will roll it out more broadly and offer this feature to all users someday, however, for now they will introduce the experiment to a certain amount of users without a big announcement. This means you may have the feature and not realise it. To know if you have the tool you should look to the right of the regular four icons on the dialogue. If you see a vertical ellipsis menu located here then you have the feature. If you don’t have the feature and you are desperate to put this feature to use after reading our story then their are plenty of third party sites you have available now such as Crowdfire. If you are unsure how this process will work here’s a closer look…

So firstly, once you’ve composed your tweet, you may see the ellipsis next to the four icons below your tweet, if this is the case then you should click on it and select the option to schedule your tweet. 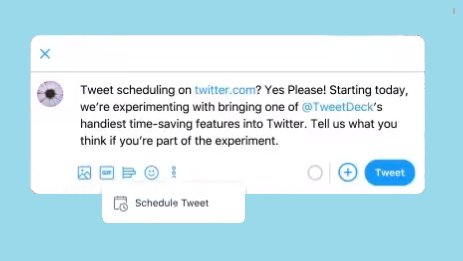 A menu will then be brought up giving you the option to select the date and time you want your post to go live. You should also be able to change the timezone settings with this feature.

At Hot Web Design we will be very pleased with this new tool and you should be too. If all goes according to plan, brands and users like you and I could end up relying less on third-party social management platforms to schedule tweets. Of course not many users know that this component is available through tools such as TweetDeck which is why the results of the experiment will be such an interesting addition to the site. Influencers, media companies and marketers will now be able to write and schedule tweets on the go and from their desktops with ease. This feature could be very handy for some lucky users who may also have access to another current Twitter test which allows users to switch accounts within the tweet reply process. This makes it much easier to manage numerous account interactions at the same time. It will be fascinating to see the response to this experiment and how people use it. If the test is a success then Twitter will look to expand it in the new year.

Leave your details and we will get everything to you